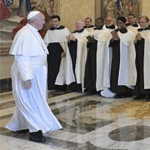 Receiving the General Chapter members of the Carmelite Order on September 21, Pope Francis urged them in the contemplation of God and in the service of His people, especially the poor.

Pope Francis on Saturday encouraged members of the Carmelite Order in their contemplation of God by seeking Him in the poor and in accompanying people in their friendship with God by teaching them to pray and live their faith in the ways of the Holy Spirit.

He made the exhortation to some 100 members of the Order of the Carmelites, formally known as the Order of the Brothers of the Blessed Virgin Mary of Mount Carmel, who are holding their General Chapter in Rome. They are discussing the theme, “‘You are my witnesses’ from one generation to the next: called to be faithful to our Carmelite charism”.

The Carmelite charism consists in living their fidelity to Jesus and serving Him faithfully through a commitment to seek the face of the living God through prayer, fraternity and service. In this regard, the Pope offered them three lines of action.

The first is fidelity and contemplation. The Carmelite mission, he said, is fruitful to the extent that it is rooted in their personal relationship with God which is marked by solitude, contemplation and detachment from the world. The Carmelite way of living contemplation, he said, prepares them to serve the people of God through any ministry or apostolate, having at heart especially the spiritual journey of people.

Regarding the second line of action, accompaniment and prayer, the Pope pointed out that anxiety about a thousand things about God, without being rooted in Him, will sooner or later find us losing Him on the way.

According to Saint Mary Magdalene de' Pazzi, this happens when "lukewarmness" creeps in consecrated life and the evangelical counsels become only a routine and the love of Jesus is no longer the centre of life. This also happens when worldliness creeps in.

As men who live more "inside" than "outside" themselves, Pope Francis encouraged them to accompany people to "make friends" with God. This, however, he clarified, it is not a question of teaching people to accumulate prayers, but of being men and women of faith, friends of God, who know how to walk the ways of the spirit.

In this, they should watch out against reducing the religious community to "workgroups". Instead, community life generates serenity, attracts the people of God and infects the joy of the Risen Christ.

Lastly, Pope Francis encouraged the Carmelites to have a tender and compassionate heart. “If one day, around us, there are no more sick and hungry people, abandoned and despised, the minores [littles ones] of which your begging tradition speaks,” he pointed out, “it is not because they are not there, but simply because we do not see them.”

In this regard, Carmelite Blessed Angelo Paoli says, "Whoever loves God must seek him in the poor", in the "brothers of Jesus". One must be wary of the contemplative who is not compassionate, the Pope said, adding, “tenderness, in the style of Jesus, shelters us from "pseudomysticism", "weekend solidarity" and the temptation to stay away from the wounds of Christ's body.

“The wounds of Jesus are still visible today in the bodies of our brothers and sisters who are stripped, humiliated and enslaved,” the Pope said.