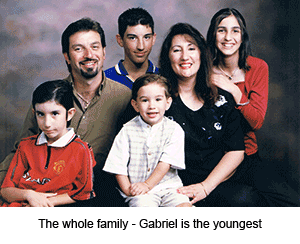 Before 7 April 2013 life was pretty ordinary.

Then on that day, in 7 minutes, my whole world turned upside down.

I am an active worshipping member of my parish, I work in a Catholic school as a Religious Education Coordinator, and I profess an absolute love for God and for humanity.  I strive to live out the Gospel values from the heart. Yet all of this could not protect me from suffering.

A terrible event was about to affect my family in a way I could never have imagined and would ultimately test my faith in God.

My youngest son, all of 16 year of age was born with an arteriovenous malformation in his brain, or an AVM.  No-one knew he was born with some capillaries missing in his brain.  This made him susceptible to brain bleeds without warning. Needless to say, survival rates are not good if an AVM bleeds. Gabriel’s AVM began to bleed deep inside his brain without warning in the early hours of the morning, on the 7 April 2013.

On the Saturday night, 6th April, I was home and kissed my son goodnight.

“I’m going to bed,” I told him. “Don’t stay up too late. You have work tomorrow.” It was a reminder that most mothers often said.  I had left Gabriel in the family room watching TV and on Facebook.

Sleep came swiftly to me. There were no worries; no anxieties. Life was peaceful.

At 12.50am, whilst in a deep sleep, there was a hurried knock at the bedroom door and the light was switched on. Standing at the end of my bed, I saw my distressed and worried son.

“I have a really bad headache, I can’t feel my left arm and I can’t talk properly” Gabriel said.

He looked in pain.

Without hesitation, I turned to my husband and said, “I think he is having a stroke!” and reached for the phone in our bedroom.

Only 5 months earlier, both my husband and I had attended a First Aid refresher course.  As there were only 4 participants at the course, I felt I could ask questions freely. Towards the end of the night, the presenter started to talk about strokes. She emphasised that they could happen to anyone and at any age.

As I heard my son’s symptoms, the words of the presenter came back to me!

“Ring an ambulance, even if you are unsure. You are not the doctor – leave the diagnosis to the professionals.”

And that’s what I did. I rang the ambulance while my husband comforted our son.

Within 7 minutes, the paramedics arrived at our house. But our son was already unconscious and not responding.

He was taken to the Queen Elizabeth Hospital, a short 10 minute drive away and immediately taken to the Emergency Resuscitation room. My husband and I were whisked away to a small, airless room. We waited....and waited.

After an hour, we were told, “Gabriel has a large bleed deep inside his brain.  He needs emergency surgery at the Women’s and Children’s Hospital.”

My husband and I were shocked and in disbelief!

I remember pleading with God not to abandon my son.

I remember telling God that it should have been me and not my 16 year old son, lying sick and dying in the hospital bed. I would have traded places with him in an instant if God had let me.

Yes, Gabriel was very sick.  Emergency brain surgery was the only option....if we made it in time to the Women’s and Children’s Hospital – 25 minutes away.

But first Gabriel had to be stabilised enough to travel in the ambulance. A group of specialists who formed the Retrieval Team was working on stabilising him for the journey.

“You can now see him,” we were told. We left the small waiting room and I just about ran to the Resuscitation Room.

At first, I saw a frail and very sick young man lying motionless on the hospital bed. His eyes were shut and he was on life support. But I knew he knew I was there.

I stroked his brow and face tenderly, begging him to fight and stay.

In this very moment, a tear escaped from Gabriel’s right eye; then another tear from his other eye.  I knew he could hear me even if he was unconscious!  I wiped his tears and told him I loved him. I kept repeating over and over: “Please, Gabriel, stay. Fight darling!  It’s Mum. I love you.”

The drive to the Women’s and Children’s Hospital was quick.  I looked at the driver’s speedometer and it was clocking at 120 kms/hour. It still wasn’t fast enough for me. I kept silently praying to God to keep him alive. As I looked at him, Gabriel reminded me of a rag-doll: he was flopping around in the ambulance bed without any personal control. He was a very sick young man and dying before my eyes.

My husband met us at the hospital as he had driven in a separate car.

I remember signing some papers to give permission for the operation as our son was taken away.  There was no time to lose!

What I remember the most was my encounter with grief. As I incessantly paced the narrow, darkly lit hospital corridor outside the operating room and intensive care ward, I felt totally alone.  Despite my husband and other family members being in a small, adjacent waiting room, I kept pacing the hallway.

All my thoughts were prayers with God, begging him to spare the life of my young son.
“He hasn’t even gone out on a proper date!” I reasoned with the Lord.  “And he is preparing to get his licence,” I added. “I need him more than you, Lord.” It was grief doing all of the talking.

In my darkest hour, as the surgeons continued their battle to keep Gabriel alive, I remember saying to myself over and over again, “Where are You, Lord? Be here with me!”  My own spiritual battle was raging. I said the Rosary over and over without really knowing what Decade I was praying. It was torture! 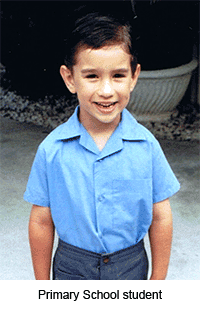 After 4 hours, a weary neurosurgeon came to the waiting room. She looked exhausted and I anxiously scanned her face for news about my son.

“The operation went well.  We removed a large blood bleed deep inside Gabriel’s head.  We achieved what we set out to do.” She whispered wearily.  The strain of the situation was showing on her face.

“And what is that?” I asked naively.

“We kept him alive,” she responded. “You will be able to see him soon.”

This woman was God’s touch of hope to a desperate mother.

This woman had been given the gift of saving lives, like my son’s fragile life. I was deeply grateful to God for her gifts and talents.

After 30 minutes, we were allowed to see Gabriel in the Intensive Care Unit.

His head was bandaged up like a turban. He was on a respirator to help him breathe.  His left eye was black and swollen.  He had tubes poking out of his body. What I noticed soon after the shock of seeing so helpless and ill in the hospital bed was a sign written in text and put on the head bandage: Caution – no bone.

The doctors had cut away a large part of his skull to release the pressure of the bleed on his brain.  It would not be covered up for at least 10 weeks, exposing his fragile and injured brain by having only his skin protecting it.

Every day I spent the whole day with my son. It was a painfully slow process to work out how much damage had been done to him. Could he see? Could he move his left side?  Could he speak?

Day by day there were glimmers of progress.  Gabriel’s left side was totally affected by stroke-like symptoms because of the brain bleed. There were days when this new reality of learning how to eat and walk and talk really got to us all. But we all clung onto hope.

Our family and friends were there for us and this gave us great comfort. There were phone calls and visits.  All offered us a piece of their heart. All encouraged us to be strong and reassured us that they would support us in whatever way we needed to be supported.

It was still a surreal time for our family.

I heard from people whom I hadn’t heard from in years. Each conversation was a conversation of compassion and love. People visited and showed us great compassion.  Food was delivered.  Flowers sent. Messages of love were read and tears shed in their reading.

When I paced that dark and lonely corridor outside the Intensive Care Unit that terrible night, I felt I was living the Lord’s words on the Cross: “My God, my God!  Why have you abandoned me!”

Yet the amazing people who entered our family since 7 April have been gifts from God.  Each one has brought their own comfort to me personally and to my family. Each gifted person working in the hospital played a role in Gabriel’s rehabilitation towards mobility. All were life-givers in one way or another.

Our lives have changed now forever.  Who Gabriel was, he is no more.

He is stronger and more courageous since his illness.

He has been to a place of suffering and near-death that many young 16 year olds would not know.

And it has given him perspective: to never take life for granted. To appreciate what we have rather than what we think is missing; to value the ordinary. To value life.

God has been felt in it all.

During Gabriel’s illness, I had to trust the Lord with all my heart and all my soul and all my mind as we were enjoined to Gabriel’s battle with death. It brought home to me the suffering of Jesus on the Cross during his terrible suffering. We uttered the same words and were both given the promise of New Life.

Where was God for me in my hour of darkness? God was in every person who reached out to me that night: from the nurses and doctors I had never met to the people who made contact and did little things for us to ease our burden.

God was there from the moment Gabriel fell ill.

God is with us now as his rehabilitation continues.

God will continue to walk with us into the future.

How do I know this?

Because of the love we received from all since 7 April.

God is love and this makes God real.

I look back now over the last 13 months since Gabriel’s life-threatening illness and wonder how I ever got through the anxiety and tears. It has been the toughest test of faith in God I ever experienced, yet the only way I could deal with it was to trust in the Lord. 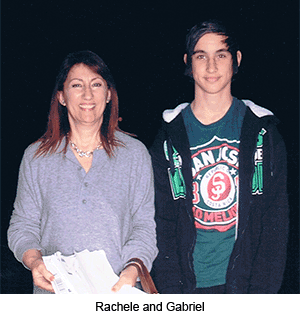 By trusting the Lord, I was loving God back. It was all God was asking me to do: to trust him.

Today Gabriel is repeating Year 11 at school.  He has issues with fatigue and finds it hard to sit through a whole day at school.  His teachers are very understanding and are working to ensure his success.

Gabriel would like to finish school and work in the disability sector. This doesn’t surprise me one bit!  As he has first-hand experience of having a disability, he would be a great support to others.  He walks with a pronounced limp but still cannot use his left arm and hand.  I always ask for prayers for his healing and I believe that he will eventually regain some mobility in his left hand.

God’s mercy was shown to us that night.

Incidentally, it was Divine Mercy Sunday.