Carmelite Laity in the Middle Ages 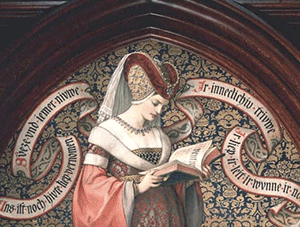 The foundation of the Mendicant Orders in the Middle Ages had a profound influence on the faithful — at that time the old monastic spirit flourished in the very midst of the people. Hence in this truly religious age, there were many who were attracted by the fervour of the Mendicants and wished to live according to the spirit of such Orders. But not all could embrace the religious life and indeed not all desired to do so. The urgent need was a form of life which would enable the faithful to live in the world according to the spirit of religious life. Thus, the various religious, their own souls burning with love of God and love for their Orders, and anxious, too, that the devout faithful should also burn with the same love, organized a movement known as the Third Order. It was by no means a new movement, as before the establishment of the Mendicant Orders, a similar society, founded by St Norbert, already functioned in connection with the Premonstratensians. However in the thirteenth century the movement received a determined and precise character, mainly through the inspired zeal of St Francis.

Nevertheless, it would not be understandable if during the two centuries that preceded the official approval there existed no connection between the Carmelites and the faithful. And, intact, we are certain that such bonds of union between the laity and the religious did exist almost immediately after the arrival of the Order from the East. They may be considered under two titles, namely, Confraternities and Affiliations. Since both not only acted as substitutes for the Third Order but also formed the foundations for its later establish-merit, they must be considered here. 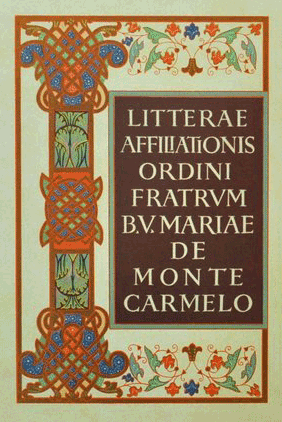 In general, affiliation may be described as a participation in the spiritual riches of the Order, which is granted to the laity for donations they have made. Such a form of participation arose from the very nature of the origin and existence of the monasteries which were almost entirely dependent on the assistance of others for their preservation. The first official mention of affiliation to the Order of Carmel is in the Acts of the General Chapter of 141 but it certainly existed before that time. In the Ordinal of 1270, for instance, there is an extensive description of “The Manner of Admission to Benefits”. Again, the extent of this affiliation varied, as not only one convent accepted the bonds of affiliation but sometimes a whole province or even the whole Order; according to this division, the “letters of confraternity” granting affiliation to the benefactor were issued by the local Prior, the Provincial or the General.

From examination of documents, it is clear that the number of Familiars or those who had received letters of confraternity, was very great in the fourteenth century, for in some cases whole groups or associations were joined to the Order in this manner. As early as 1300 there existed at Venice the Confraternity of the Blessed Virgin Mary of Mount Carmel while at Valencia in 1361 the Confraternity of the Weavers was formed.

Also, in the fifteenth century we notice an intimate connection between the Carmelites and a group of Merchants at Frankfurt; the main explanation of this union seems to be the desire of the Merchants to participate in the spiritual treasures of the religious. The following quotation from the historical thesis of Dr Otto Fellinger deals with this question of the bond between the religious and the Merchants: “The ardent wish of the Merchants to obtain a memento after their death and to find heavenly rest for their souls was satisfied by means of alms and donations to the convent... and especially by membership in the Confraternity of the Convent, which enabled them to participate not only in the many Masses which had to be celebrated according to the Rule of the Confraternity but also in the good works of the entire Order.” It is clear, however, that although these associations participated in the Order’s good works, there was no obligation for them to live according to the Carmelite spirit. Hence, although they were often called Confraternities they must be carefully distinguished from the Confraternities properly so called which also flourished during these centuries. The Confraternity was a much closer bond of union with the Order and is more important for two reasons — first, because during the fifteenth century, members were obliged to wear the Scapular and hence it developed into our Scapular Confraternity; and secondly, since members were then provided with a rule of life which was definitely Carmelite in its spirit, the Confraternity more than any other Carmelite society of that period, acted as a substitute for the Third Order.

CONFRATERNITIES
At the time of Tertullian, Confraternities already existed in the East but their exclusive aim was charity towards the poor and the infirm. They were not introduced into the West until much later and their purpose and character were very different. St. Boniface may be considered their true founder in the West as he established them on a firm footing under their present essential characteristic, namely, a spiritual tie or relationship. For, in his difficult labor, St Boniface had established a spiritual bond with the English Bishops and the Abbot of Monte Cassino by which they would pray for the success of his work and he, in turn, would pray for them. From this period, such Confraternities between missionaries and convents, or in some cases between convents themselves, became very popular — their purpose is excellently summed up in the title by which they were frequently known, i.e., Communicatio bonorum operum, an interchange of good works. With the coming of the Mendicant Orders, the Confraternities, while retaining the essential element of a spiritual bond, changed to a large extent their former purpose. They now developed into a group of people who practiced a definite devotion — these groups were attached to a Church and received special direction. 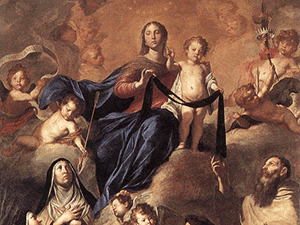 Many Carmelite Confraternities are traced to this period, but since all enjoyed the same fundamental privileges and spirit of life, we may speak of them under the inclusive title “Confraternity of Our Lady of Mount Carmel”. The object of the Confraternity was to give the faithful a better opportunity to live according to Christian perfection and more particularly to pursue this end by means of the Carmelite spirit — the distinctive note being a devout love and sincere imitation of Mary, the Splendor of Carmel. We must note here, however, that before the middle of the fifteenth century, the Scapular did not hold the place of importance it enjoys in our modern Confraternity. It was not until the time of Blessed John Soreth that the Scapular began to attract the faithful to the Order; and during the time of Henricus Sylvius, who was General towards the end of the sixteenth century, it eventually became the very reason of the Confraternity’s existence. This fact, that devotion to Mary and not the Scapular, was the most important reason for membership within our Confraternity in the early centuries of its existence, is aptly expressed in several pictures of the time. Our Lady is frequently represented with her mantle outspread, covering with motherly tenderness both Carmelites and faithful, probably members of the Confraternity or Familiares — yet in most of these pictures the Scapular is absent. Characteristic of this point is the Mantle-Madonna preserved at Pordenone, where Our Lady is clearly represented as the Mother and Protectress of her “Marian family”. Also in the statutes of the Confraternity of Ferrara, 1432, this intimate connection between the Carmelite Religious and the laity under the protection of the “Blessed Virgin of Carmel” is evident.

These Carmelite Confraternities were probably attached to most of our Carmelite churches, where they held their meetings, and were directed and regulated by Carmelite priests. Their rule of life, in which the spirit of the First Order is apparent, may be judged from the statutes of the Confraternity of Ferrara, already mentioned. Other Confraternities already existing at an early date were at Bologna Venice (1300), and, more important, at Florence. The activities of this last named Confraternity between the years 1280 and1296 are recorded in a bock re-published at Bologna in 1867. From this document it is clear that the Confraternity was already flourishing when the record of the activities began, so we may conclude that it was established very soon after the Scapular Vision in 1251 — which event assured the Order of prosperity in the West.

Soon after the establishment of the Carmelites among the Mendicant Orders, then, they extended their influence beyond the Order itself, forming, as did the other Orders, various associations whose aim was to encourage the practice of the spiritual life among the faithful. Indeed, Orders are to be the more venerated and esteemed because of this deep love and desire for perfection which their own moving example produced among the faithful. The Spirit of Carmel is the Spirit of Mary and in this truth there is contained the great attraction which drew the laity of the Middle Ages to Mary’s chosen Order. May we of today witness a revival of this interest among the faithful; may we do all within our power to cultivate the Spirit of Carmel first within ourselves and then among others. What more powerful means have we to establish once more the Reign of Mary on earth than by uniting under the banner of the Queen of Carmel!