The words ‘Santa Cruz’ are Portuguese for ‘Holy Cross’ a reference to the crosses in the Santa Cruz cemetery  where the massacre took place. As East Timor has a Catholic majority in every cemetery where Catholics are buried, there is a cross a symbol that the dead have died in Christ. 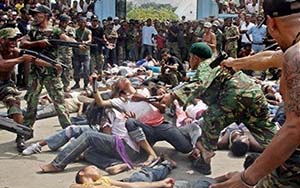 According to ‘Jornal Nacional Diario’ (Journal National Diary) a demonstration to protest against the Indonesian government for their illegal occupation of East Timor happened when John Paul II,  visited East Timor,12 October 1991 and included the visitation of a delegation from Portugal. Most of the protesters were young people which in ‘Tetum,’ were called ‘Juventide asuwain’, literally, ‘youth brave’ or ‘young people who are brave to defend their rights against Indonesia’.

After Pope John Paul and the Portuguese delegation departed, many young protesters were captured by the Indonesian army, some put in prison and others treated badly by Indonesian military and pro-Indonesian Militia.  Some young people who escaped from the Indonesian army were hiding in Motael Church because it was thought that it was a secure place.  A leader of the young people called for all the protesters to keep calm and not react to any actions of Indonesian troops who were still looking for those who were in hiding. 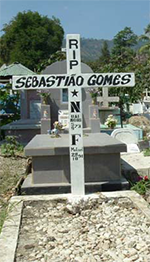 A week later, the family of Sebastião Gomes gathered together in Motael to celebrate the funeral mass and asked the priest to bless the flowers and candles which would be put in Santa Cruz cemetery  where Sebastião was  buried.  The cemetery is far from Motael Church, so after the liturgy of the dead, the family carried the flowers and candles in procession to Santa Cruz. In the meantime ‘Juventude Asuwain’ protesters who were appalled by Sebatião Gomes murder by the Indonesians, organised themselves to follow the procession in solidarity with Sebatião’s family to the cemetery. Some of them carried the East Timor flag as a protest against the inhumanity of the Indonesian government.  Upon there arrival at Santa Cruz, Indonesian troops and police suddenly attacked and shot them. According to some sources there were more than 271 young people killed and others who disappeared now believed to be dead.

Today, 12 November 2016, we, the East Timor People, celebrate the 25th anniversary of this painful episode of the Massacre of Santa Cruz, where many Timorese young men and women lost their lives for the freedom of generations of Timorese who today enjoy living in a peaceful country. Timor Leste has now enjoyed fifteen years as “Republica Democratica de Timor Leste.” an independent country.

As a Timorese young man I am very proud of the achievements of my government over the past fifteen years. One thing that I am still questioning is where is there justice for those who were victims of the Santa Cruz Massacre? Why is the government ignoring this? I know that the government has recognised that there was a massacre by compensating those who lost their loved ones. But the question remains: where is Justice? Can Justice be replaced with compensation? Of course not! Justice needs to be seen to be done otherwise the victims still remain victims and the perpetrators continue to enjoy freedom for this injustice. I hope that the government will look seriously at this issue because the victims are still crying for justice through people like me and their families. I also hope that the government will apply justice to the perpetrators of the massacre.