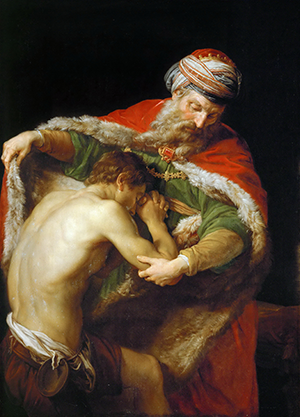 This Sunday’s Gospel is a parable of lavish and unexpected forgiveness and reconciliation. It is one of three parables in which God’s mercy breaks through all human and religious restrictions about how God should act toward sinners.

A wealthy father has two sons. Very cheekily, the younger son asks for his share of the estate which would come to him on his father’s death. This is a young man who has places to go and things to see!

Remarkably, the father gives him half of his estate, not the one-third to which the son was entitled. No wonder the older son is put out. The younger son goes off and has a great time until the money runs out. Financially ruined he has to earn his keep feeding pigs. He decides to return home, beg forgiveness and ask to be only a servant in his father’s household.

The father is anxiously waiting for the son when he returns. He runs to embrace him. The son begins his confession, but the father takes no notice. He does not chastise or lecture. He refuses to treat his son as a servant and immediately sets about restoring him to his rightful place in the household with the ring, the robe and sandals. He orders a feast to celebrate the fact that his son is alive and has returned. No wonder the older son is angry and resentful. But the father sets about reassuring him that his place in the household and in the father’s affection is secure and urging him to be reconciled with his brother. We are left wondering about what eventually happened.

The Gospel offers not just the hope of God’s forgiveness but the certainty of it.

The message today is: Rejoice in God’s abiding mercy!