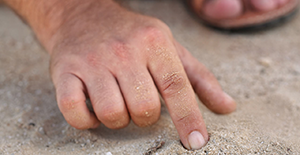 We know the story of the woman caught in the act of adultery so well that we usually miss the fact that it is not only the woman who experiences God’s forgiveness through Jesus in this story.

The scribes and Pharisees, out to trap Jesus, parade a hapless woman before the crowd gathered to hear Jesus teaching. We can only imagine her embarrassment as they publically accuse her of adultery. Noting that the law of Moses says that they should stone the woman to death, they ask what Jesus thinks.

Jesus, already seated, bends lower and writes on the ground. What he writes we do not know, but from his ‘lowly’ position Jesus quietly manages to turn the whole situation around.

At first he says nothing. When the scribes and Pharisees persist with their question, Jesus simply says, ‘Let the one without sin be the first to throw a stone at her’, and goes back to his writing.

We sense that an awkward silence followed before the once threatening scribes and Pharisees seem to just melt away. Jesus’ words seem to touch them deeply and melt away both their harsh attitude towards the woman and their desire to entrap him.

Like the woman, they are not condemned by Jesus but restored to right relationship with him and the woman – they no longer want to trap Jesus or harm the woman. They quietly leave. Jesus pronounces forgiveness for the woman and tells her not to sin anymore.

The Gospels of the last two Sundays were parables about God’s forgiveness and tender care in nurturing us back to life. In today’s Gospel we see God’s lavish forgiveness in action as Jesus deals with a concrete human situation of life-threatening judgement and condemnation.

We are called, not to be judges over others, but practitioners of God’s lavish compassion and mercy.