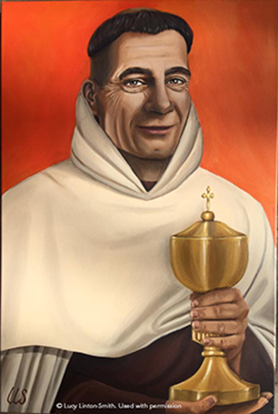 Today the Carmelite family celebrates the feast of Blessed John Soreth (c.1395 – 1471), Prior General and reformer of the Carmelite Order. During his time as Prior General he was also responsible for the creation of Carmelite communities for women and the admission of lay associates as part of the Order.

He was elected Prior General at the General Chapter of Avignon in 1451. He encouraged reform throughout the Order and travelled constantly around Europe, visiting the various communities. Contemporary accounts record his sense of humour, his courage, a gentle temperament and even that he enjoyed playing an occasional game of football!

When, in 1468, a violent mob had broken into the church of St. Christopher and strewn consecrated hosts on the ground John fearlessly gathered them and took them to the Carmelite church. For this reason, artists sometimes picture him with a ciborium.