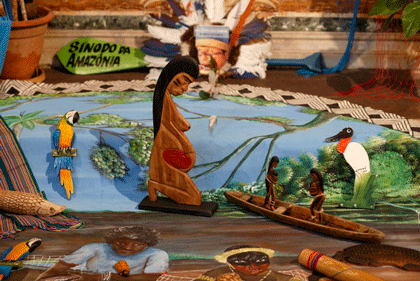 During the Synod on the Amazon the Carmelite church of St Mary in Traspontina, near the Vatican, has been a focal point of daily prayer and pilgrimage. A display featuring various aspects of Amazonian faith and life is present in the chapels of the Church. Included in the display were several carved wooden statues of a pregnant Amazonian woman. Two men filmed themselves entering the church on 21 October, taking the statues from the chapels and throwing them into the Tiber River a short distance away.

The action was quickly welcomed by conservative US Catholic media sites including Life Site News and EWTN. Commenting on the episode in L’Osservatore Romano Andrea Tornielli (Vatican Editorial Chief) said: “An image of motherhood and the sacredness of life, a traditional symbol for indigenous peoples representing the bond with our ‘mother earth,’ as described by Saint Francis of Assisi in his Canticle of the Creatures, was thrown away with contempt in the name of tradition and doctrine.” The Prefect of Vatican Communications, Paolo Ruffini, described the action as a “stunt”.