Working in the vineyard 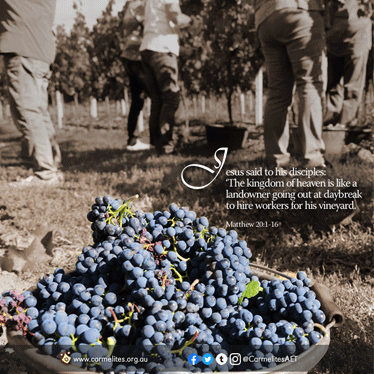 Jesus said to his disciples: “The kingdom of heaven is like a landowner going out at daybreak to hire workers for his vineyard. He made an agreement with the workers for one denarius a day, and sent them to his vineyard. Going out at about the third hour he saw others standing idle in the market place and said to them, ‘You go to my vineyard too and I will give you a fair wage’, So they went. At about the sixth hour and again at about the ninth hour, he went out and did the same.Then at about the eleventh hour he went out and found more men standing round, and he said to them, ‘Why have you been standing here idle all day?’ ‘Because no one has hired us,’ they answered. He said to them, ‘You go into my vineyard too.’

In the evening the owner of the vineyard said to his bailiff, ‘Call the workers and pay them their wages, starting with the last arrivals and ending with the first.’ So those who were hired at about the eleventh hour came forward and received one denarius each. When the first came, they expected to get more, but they too received one denarius each. They took it but grumbled at the landowner. ‘The men who came last,’ they said, ‘have done only one hour, and you have treated them the same as us, though we have done a heavy day’s work in all the heat.’ He answered one of them and said, ‘My friend, I am not being unjust to you; did we not agree on one denarius? Take your earnings and go. I choose to pay the last comer as much as I pay you. Have I no right to do what I like with my own? Why be envious because I am generous?’ Thus the last will be first, and the first, last.” (Matthew 20:1-16)

For many, the parable which Jesus tells in the Gospel today seems profoundly unjust. Why should those who have done little work get the same pay as those who worked all day?

Maybe the answer lies in the first reading for today: My ways are not your ways; my thoughts not your thoughts. So often in the scriptures, God seems to have a totally different way of approaching things to most of us.

The parable presents God as a landowner going out at five different times during the day to hire workers for his vineyard.

With the 6am workers he makes an agreement for one denarius for the day’s work - the usual daily wage for a labourer. The workers who come later are promised a ‘fair wage’. But when payment time comes, they get a full day’s pay even though some have worked only one hour!

Usually, the youngest and fittest would be hired first and older and weaker workers left till last. But God doesn’t seem too worried about what condition the workers are in or what time of day it is.

The last comers must have been delighted to have received their unexpected full day’s pay. For them, it was really a gift rather than a wage for time worked. The ‘early birds’ fell victim to ‘rising expectations’ thinking that they would get more.

In giving both early birds and late comers the same ‘wage’ the landowner has made them equals – all are equal beneficiaries of God’s gracious invitation to the Kingdom. And there is a place for everyone in that Kingdom, including those often left behind in the world – the poor, sick, old, disabled, etc.

Life in the Kingdom is not a reward for long hours of work. It is a gift – it cannot be earned, but is had by responding to God’s choice of us, no matter what condition we are in, whether we are an early bird or a late comer.

The parable can also be interpreted as a practical expression of how to love our neighbour – with generosity and compassion, without considering if they deserve our kindness or not – for the disciple of Jesus must think and act like God.

This parable fits right into the biblical idea of justice which is heavily biased in favour of the ‘have nots’ – the widows, orphans, poor, blind, lame, sinners, etc. No one is left out of the gaze of God’s care.

God’s outrageous and extravagant graciousness and generosity is so different to the often petty and exacting way in which we treat each other. God’s sense of fairness and justice is so much broader and richer than ours. That is what life in the Kingdom of God is supposed to be.

Like last Sunday, it is our awareness of God’s extraordinary kindness, patience and mercy which help us to act in the same way - to see with God’s eyes, to feel with God’s heart and to act with God’s intention.

Join us in celebrating at home this Sunday using the links below.