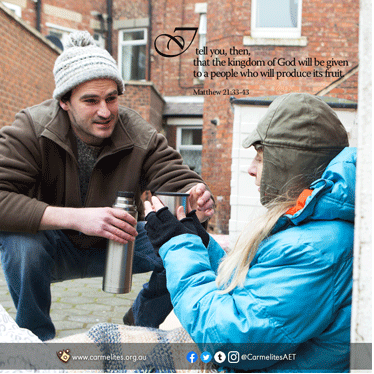 Jesus said to the chief priests and elders of the people, ‘Listen to another parable. There was a man, a landowner, who planted a vineyard; he fenced it round, dug a winepress in it and built a tower; then he leased it to tenants and went

abroad. When vintage time drew near he sent his servants to the tenants to collect his produce. But the tenants seized his servants, thrashed one, killed another and stoned a third. Next he sent some more servants, this time a larger number, but they dealt with them in the same way. Finally he sent his son to them. ‘They will respect my son,’ he said. But when the tenants saw the son, they said to each other, ‘This is the heir. Come on, let us kill him and take over his inheritance.’ So they seized him and threw him out of the vineyard and killed him. Now when the owner of the vineyard comes, what will he do to those tenants?’ They answered, ‘He will bring those wretches to a wretched end and lease the vineyard to other tenants, who will deliver the produce to him when the season arrives.’ Jesus said to them, ‘Have you never read in the Scriptures:

“It was the stone rejected by the builders that became the keystone.
This was the Lord’s doing and it is wonderful to see?”

I tell you then, that the kingdom of God will be taken from you and given to a people who will produce its fruit.’ (Matthew 21:33-43)

In last Sunday’s parable, Jesus addressed the Jerusalem priests and elders with a message that “action speaks louder than words”. This Sunday, Jesus continues his address to them, building upon that message by using another parable. This week’s parable asks us how we have used the gifts that God has entrusted to us. It is essentially a parable about stewardship.

God has entrusted the kingdom to us, individually and collectively. We are expected to cultivate and manage this Kingdom life in such a way that it bears good fruit, fruit that we can present to God, the ‘owner of the vineyard’.

There is nothing in the parable to indicate that there was any actual produce for the landowner to collect. It may very well be that the tenants had simply neglected the wonderful vineyard altogether and allowed it to fall into ruin.

Each of us has been given, not only the gift of life, but the wealth provided by God’s grace – the very kingdom of God. Indeed, we have been privileged. However, with this privilege comes responsibility and we are ultimately responsible to God for the way we use or neglect the Kingdom within. We have to become a people who produce the fruit of the kingdom: love, mercy, justice, forgiveness, tolerance, hope, joy, deeds of loving kindness.

What will we do with the Kingdom that has been entrusted to us?

We pray that we may leave all the various ‘vineyards’ of our worlds in a better condition than how we were given them. May we work to develop and sustain our awareness, seek out opportunities to contribute and then make judicious use of the gifts and grace that God has given us by letting God’s grace be seen at work in us - and, through us, at work in the world.

We are stewards of the Kingdom and of God’s grace. Let’s not waste such a great gift.