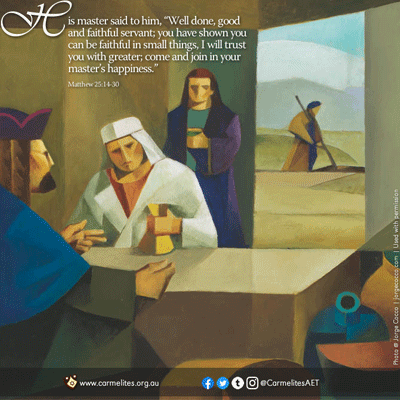 Continuing the theme of last week’s parable about the wise and the foolish women, this parable also concentrates on wisdom. The wise servants fulfil the bond of trust placed in them by the master by are being productive with an enormous amount of money entrusted to them. Like the perfect wife in the first reading, they are industrious in contrast to the third servant who uses fear as an excuse for doing nothing.

Like last Sunday, today’s Gospel is another ‘meantime’ parable - how do we live as disciples of Christ in the meantime as we wait for his return?

The master entrusts his property to his servants and goes away. On his return, he asks for an accounting of what they have done with his property. The servants who have been industrious and productive are praised. The servant who did nothing is condemned.

Christ has entrusted us with the Kingdom of God. We are called to work industriously and productively with the Spirit so that the Kingdom, the Reign of God’s grace, may be seen and experienced through us, and that others also may come to believe. The Kingdom gifts of love, justice, mercy, compassion and forgiveness are multiplied. The Kingdom grows.

Both the first reading and the Gospel today praise busy, energetic people - those who produce much from what has been given to them. In these readings we find an image of how to wait in this ‘in between time’ for the final coming of Christ. The Christian disciple is called to watch and wait, not in a lazy or self-indulgent way, but eagerly doing the work of the Kingdom and producing its fruits of justice, mercy, peace, hope and love as we go about our daily tasks.

It is the ideal of responsible stewardship which is proclaimed in the Gospel. We have been entrusted with the very life of God. What are we doing/will we do with it?

Join us in celebrating at home this Sunday using the links below.