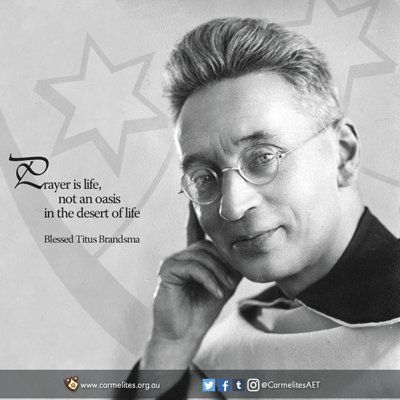 Titus Brandsma was a Dutch Carmelite, scholar and writer who was killed in Dachau Concentration Camp because of his stance against Nazism.

Born in The Netherlands in 1861, Titus joined the Carmelite Order as a young man. Ordained priest in 1905, he obtained a doctorate in philosophy in Rome. Titus brought his deep prayer practice to his studies, his teaching and his writing.

In 1923 he helped the Dutch Bishops found the Catholic University of Nijmegen where he served as professor of philosophy and of the history of mysticism and, later, as Rector. He was noted for his constant availability to everyone and for his concern for the wellbeing of his students, especially those less well-off for whom he collected food, clothing and blankets.

He was a professional journalist and a leading figure in Dutch Catholic Press. In 1935 he was appointed ecclesiastical advisor to Catholic journalists. Both before and during the Nazi occupation of The Netherlands he was an outspoken advocate for the Catholic press and religious freedom. For this he was arrested in January 1942 and sent to a succession of prisons and concentration camps where he brought comfort and peace to his fellow prisoners and did good even to his tormentors. In 1942, after much suffering and many humiliations, he was killed by lethal injection at Dachau. He was beatified by John Paul II on 3 November 1985.

Titus Brandsma is a source of inspiration for journalists, those being oppressed by others and for those involved in the search for God.